We're departing Charleston on Sunday, bound for somewhere in North Carolina. Depending on how long the weather window stays open, we'll zoom along until we find a favorable tide to make an inlet. The forecast is for light to moderate winds out of the south and southwest...Pilger's favorite point of sail when we're headed northeast.
We have stopped to show Pilger to two different parties, and one of them sent me the collage you see on the header, Thank you Kelly! It was fun showing Pilger off and meeting some like-minded folks.

Our winter was laid back and fun. Easier the second time around. We went farther, too, had some great fishing and met even more cool cruisers. We saw all kinds of other boats, some inspired Jim to study catamerans more closely. We met some sea-hitchhikers and thought that we might be able to pull something like that off, even if just to sail on some other designs for a test-drive. We even found a pedal-powered canal boat with solar capacity as well. Maybe we'll find ourselves pedalling across Europe?

Even though this cruise is not over yet, I feel that the photo on the bottom reflects my memories about this trip. Warm, unusual. Friendly. And just a little hot-to-trot! It was taken by Linda Ohlson Graham, thanks, Linda! 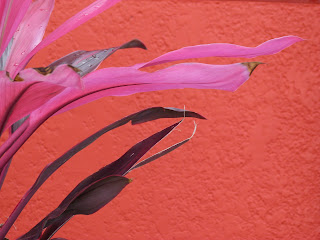 I'll let ya'all know what happens with our next showing!
Posted by Michelle Lambton at 11:18 AM 2 comments: 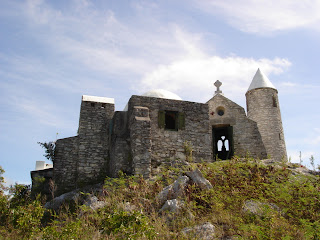 I got the camera to give it up! Woohoo! Here is a shot of a Father Jerome building on Cat Island, Bahamas. He was an architect who later signed up for the Anglican Ministry. If that wasn't enough, he later converted to the Catholic church. It was as an architect that, after watching several churches get blown to bits by hurricanes, that he found his calling: use Bahamian stone to construct church buildings. May then they'll have a chance to last a bit longer. He oversaw the construction of several before retiring to this hermitage. It is a tiny wee thing, complete with chapel, a small room to fit a 6 ft bed and a nail to hang his robe. The tower has a bronze bell, the chapel has a one-man bench. It is buttressed. I believe it could house hermits for ages to come. Father Jerome passed away in the 1950's.

As great as it was to see more of the Bahamas this trip, it's always good to be headed back home.
On our passage over to Florida, we talked warmly of all our upcoming plans, places we want to see, water we feel would be do-able. We discussed what we learned on this trip, reminisced about the people we met, some situations we got into. We've concluded that we are looking forward to more cruising, maybe the other direction this time. We've heard that the coast of Labrador is really quite something. Pilger may or may not be the right boat for such a trek, we have been pondering all this.
In the meantime, we're looking forward to summer in Prince Edward County. We've decided to try to make-do without buying another car. See how it goes. I'll be making good use of my Most Excellent Bike, with its trusty trailer. And maybe Via to see my Mom.
We're expecting to be back home late May, see everyone then!
Posted by Michelle Lambton at 1:49 PM 2 comments:

We pulled out the Planning Chart a few days ago, just to make sure Cuba was where we left it. And we decided that it would add too many more miles to the trip. So Cuba and the Greater Antilles will have to wait for another time.
We will go back through a few different places, some old favorites and hopefully lotsa sea miles so we can put bigger chunks of mileage under the keel.
Posted by Michelle Lambton at 9:49 AM No comments:

So! I have not made a post in a lo-o-ong time. It's because my camera croaked and even I don't like to read blog posts with no pictures. I hope this very short post will satisfy;
The cruise has gone well so far. Two sets of freinds have joined us for a time, and now it's just the two of us. It was always really great to have extra bodies around to share the work and extra brains and psychies to converse with. It was fun.
Jim calculated we have come around two thousand miles from Nova Scotia, that's already a good long cruise! So even if we turn around now, it's been great! But we will press on towards Cuba. Another cruiser asked why Cuba was so appealing, why did we want to go there? It took a minute to form a good answer (but I think it was taken), ...because it's there! And March is the time, so off we will go. Then I might tell you if it was worth it. Incidentally, it is only a long day-sail to cross from the bottom of the Bahamas to Bahia de Vita, Cuba.
We have done a lot of fishing, a little catching & eating, some snorkling and lots of swimming. Apparently the fishing & lobster catching is even better in Cuba, we'll see if Jan & Cam have left us any!
If I find any wifi in Cuba, I'll letcha know how the crossing went!
Posted by Michelle Lambton at 8:42 AM 1 comment: 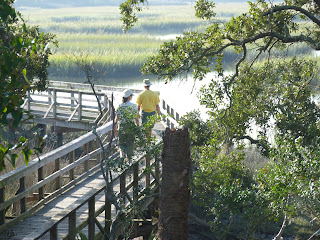 It's been fun re-visiting some of our favorite places, we pick up where we left off and go deeper. This time we found a great National Park, Cumberland Island. The good folks of Thomas Carnegie descent thought it best to donate their homestead (4000 acres) to the NP's and allow others to enjoy. We are so glad they did. We saw  feral horses, wild turkeys and squirrels, shore birds of all kinds, so cool. 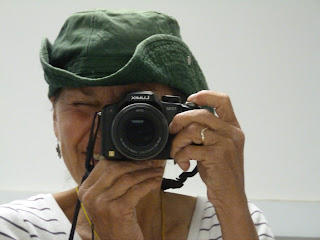 I am grateful that Linda shares her photos with me, this is what she looks like half the time. All these shots are hers. Gotta get a new camera... 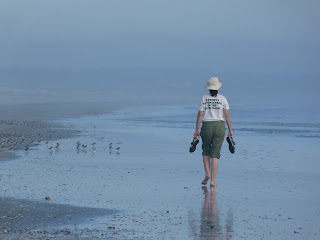 Here's Michelle, swingin' her...umm...sandals on the beach! Great shot, Linda!!!
Anyhow, we're getting ready to cross the Gulf Stream and get ourselves over to the Bahamas and further. Jim just sewed up the Jamaican courtesy flag...just in case.
But until then, we're eating well by finding farmer's markets here and there and discovering some new veggies. Collard greens. will letcha know how that one goes!
It's always nice to hear from anyone, so feel free to add a comment
Posted by Michelle Lambton at 12:52 PM 1 comment: 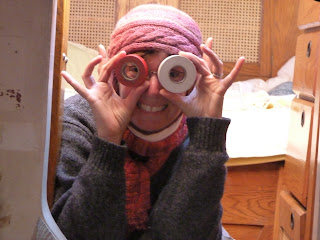 ﻿
We're getting a little bit bored of waiting for weather to make some sea-miles down to Charleston, so we're getting up to all kinds of projects and repairs. And general silliness. 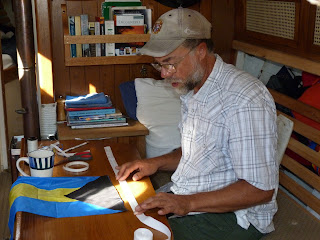 Jim is getting the hang of sewing up courtesy flags for our intended ports, here is the Bahamian flag getting ready to go, next up...Jamaica. 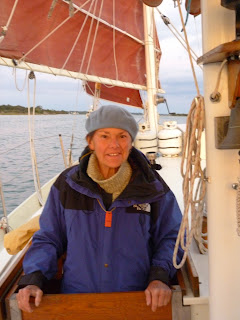 And Linda is just happy to be here! It has been great having a third body around to help with all kinds of stuff, especially just being a friend. We have been enjoying some of her "one liners", teeny tiny poems that will open your mind and help concieve of a collective consciousness.
www.earthoceanheavens.com will take you to view some of her poetic works.
Posted by Michelle Lambton at 9:02 AM No comments: So here we are, three shipmates, gadding about in Elizabeth City. Liz city is known throughout the cruising community as "Home of the Rose Buddies". A certain fellow decided to personally greet the passing Snow Bird Fleet with fresh roses for the First mates (The ladies on board) and a wine & cheese reception if five or more boats were tied off on the free docks. This began two decades ago, and is carried on by the fellow's buddies upon his passing. The Rose Buddies. One of the boats that happened to be there was THE official Army Corps of Engineers Canals Division boat, so we got to meet and chat with the Colonel and his crew at the W&C. We thanked them for the work in keeping the Dismal Swamp (what a mis-nomer!) Canal and the entire Intra-Coastal Waterway open.
Now that we are off the Atlantic and into the ICW, we are starting to meet up with a lot more cruisers heading south. Always someone to chat with! 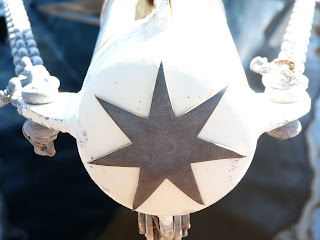 After verifying the Legend of Pilger's Seven Pointed Star, I will share it with you. Pilger's builder, Deiter Hienz, put a gold-leafed heptogram on the tip of the bowsprit to tell the world he was off on a Pilgrimage of the Seven Seas. The next owners, Don & Sue, had..ahem..removed shall we say... the sprit and changed it from wood to aluminum, but kept the star. Is has lost the gold leaf on its face, but still has it on the edges. See the shiny bits? What a touch of class!
So Jim & Michelle will continue the Pilgrimage. So far, it's been just the one sea, but we'll see what we can do about that!
Having Linda on board has certainly made a difference. Besides sharing the work/meals load, its just plain fun having another friend about to chat with, re-tell your old stories to and make games-night a whole lot more fun!
So please meet Linda; a Peace Poet from Worcester, Mass. Cape Cod, Mass. & Boulder, Colorado, plus many more places.  She has got a great website www.earthoceanheavens.com that has some of her photos and literary works.  Linda has thousands of miles under her keel, sailing with Captain Joe around this coast and the Caribbean Sea. She has traversed the Panama Canal, cruised Haiti, the San Blas Islands, Panama and Columbia + the Bahamas including long trips to the Berry Islands when they had a home-base in Miami, FL. After that, she moved to Denver, Co, where she met and married Douglass Graham, (now Graem) curator of the JMW Turner Museum. They had a daughter, Isis,  who now lives and attends grad school at the University in Stockholm, Sweden.
She was in a good position to ponder life and its fluidity when she introduced herself to us on the dock in Provincetown, on Cape Cod that day. Jim was able to tell her that we were in fact looking for others to join us. She knew immediately that she wanted to come, and after tying up what little loose ends she had, she met up with us in New York City, at the 79th Street Boat Basin.
We look forward to our travels together and the opportunities that having a Peace Poet on board will bring!
A note: the images here are taken by Linda Ohlson Graham.
Posted by Michelle Lambton at 1:32 PM No comments: 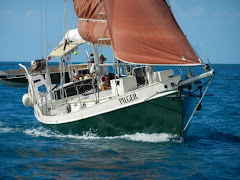 Just click on the photo for all the info. Photo taken by Laurel Roth, thanks Laurel! It's great to have a picture of Pilger under sail.

Michelle Lambton
Jim and I have learned a lot about living small, thus CONSERVING WHAT IS LEFT OF THE EARTH'S RESOURCES. You can too: get involved with your local Transition Town Initiative to find out how! Don't be shy, and don't wait either! Please post a comment, or email me at michelle.lambton@gmail.com